Heart-Mind-Strength: that space where story, therapy and life intersect. 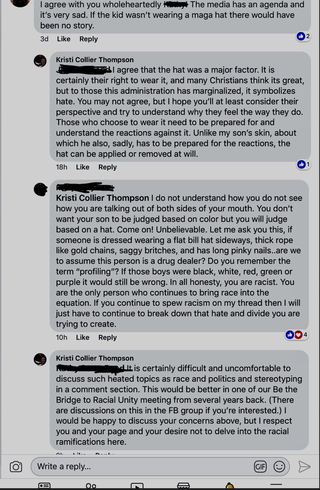 This week I, along with several million other social media users, waded into the Covington Catholic debacle. Many of the discussions were thoughtful, complex, nuanced, multicultural. Other discussions, not so multicultural, stirred REALLY BIG FEELINGS, name calling, and a host of false equivalencies and racial misunderstandings.

This one, in particular, hit a number of those variables. Difficult, because this is a woman I know has a heart that loves others, one I know has opened her home to people from other cultures. How can we both love others AND hear others?

My start to the conversation: This incident seems to be a massive misunderstanding that actually speaks volumes to our race relations today… At this point in time, like it or not, MAGA hats are seen as a red flag for white privilege. And Native people have been and continue to be mocked and marginalized. It’s all too easy to jump to conclusions based on previous patterns… It’s not at all okay, but it’s an important conversation we need to have…

The commenting went on for a bit with rebuttals, accusations of division, and attempts at explanation, ending with this thread. To which I gave up (until this post) because there really seemed no point. Until a black friend reminded me that white folks need to push into these hard conversations, to overcome our failure to communicate. So what I coulda, woulda, shoulda said:

Her: You don’t want your son to be judged based on color but you will judge based on a hat.

May I repeat, AGAIN, that I don’t want anyone to be judged unfairly, to be mocked, to be threatened. Truly. Be they MAGA-decked teenagers or black youth. BUT…

This is a false equivalency. Can we agree that a hat IS NOT THE SAME as black skin? The hat can be put on and taken off at will. The skin cannot. Wearing a hat or not wearing a hat is a choice. Skin color is not.

And furthermore: can we agree that a hat sporting THIS particular slogan is inextricably connected to our current president. It is part of his brand. There are many people who love this president’s words and policies and see no problem with this slogan. I may disagree with their assessment, but they do have a right to support who and what they will.

But can we at least try to understand that many people in historically marginalized groups view this slogan and this president’s policies and words through that A, that “again”, through a historical lens of massacres, broken treaties, slavery, government-enforced terror, segregation, discrimination, lynchings, police brutality, imprisonment? And can we empathize that marginalized people have seen a rise in racial terror during the last three years? And that these current and historical realities color this slogan and this president’s actions as worrisome if not outright false, racist, demeaning, threatening?

Restated, can we agree that a plain red hat on a white teen sparks no presumptions? It is the slogan that adds the context, the connection to this president and his policies. Not the hat in and of itself.

So, yes, I might judge a hat. And no, I don’t want my son to be judged based on color. Because the ONLY meaning we should assign to skin color is shared humanity.

Her: Let me ask you this, if someone is dressed wearing a flat bill hat sideways, thick rope like gold chains, saggy britches, and has long pinky nails…are we to assume this person is a drug dealer?

Clothing choices often send a message, an identity. Teenagers know this, and often “try on" different personalities and different friend groups with the clothes they wear - goth, emo, preppy, jock, professional, urban. And because we’re human we often categorize people into those groups based on the clothing they’re wearing. IT WOULD BE BEST if those categorizations did not include judgments. But based on our own histories and hurts and fears they often do.

But, similar to above, it is a false equivalency to compare the presumptions surrounding a MAGA hat with a flat bill hat sideways (and etc.). The attire she describes does have an association with urban rap culture, but there’s no direct connection with drug dealing. UNLESS, perhaps, that flat-bill hat has its own branding: a marijuana leaf, perhaps, or a “Free El Chapo” slogan. Why ELSE would we make that assumption? (Cue introspection about implicit bias and stereotypes of urban style.)

Can we agree that it is important to have conversations with our children about how others might perceive us AND that we can do so while empathizing that others’ perceptions might not be fair? A high schooler is old enough to understand the perceptions about what they choose to wear - we talk to them about how to dress when going on a job interview. Yeah, they might hate wearing a tie instead of a t-shirt. But…perceptions.

Black teenagers have had to be schooled on the weight of others’ perceptions of their demeanor and their attire for centuries. Black teens are often warned against wearing hoodies. IT IS NOT FAIR. IT IS NOT OKAY. And yet…his life may be on the line (cue Trayvon). If my black twelve-year-old is old enough to understand the weight of wearing a black hoodie, surely a white high schooler is old enough to understand the weight of history and policy behind the MAGA slogan, and to understand why others might perceive this slogan negatively. IT MAY NOT FEEL GOOD. And yet…

While a MAGA-bedecked teen may be subjected to criticism or heckling, wearing a MAGA hat does not elicit the same life-or-death history as does wearing black skin. IT JUST DOESN’T.

Her: If those boys were black, white, red, green or purple it would still be wrong.

If those boys were red or green or purple I would absolutely judge them to determine if emergency medical attention was warranted. (See Cyanosis.) I’ll take the risk of being wrong.

Her: In all honesty, you are racist. You are the only person who continues to bring race into the equation.

Boom. There is it. So much to unpack here, much of which corresponds directly to Robin D’Angelo’s research and writing on white fragility.* And on the sociological definition of racism.** (A white person asking another white person to consider the perceptions of MAGA hats is not racism. It is criticism. Disagreement. Different perspectives. Not racism.)

Honestly, reading this paragraph hurt. A lot. Not the part about being called a racist - I’ve done enough soul searching and self-analysis on the history of our country and my own racial blindspots to know that yes, as Kyle Idleman would say, I’m in the circle. I got work to do. The hurt was the dismissal, the implied FU, the unwillingness to enter into difficult conversation. I know she loves others. I hope she knows the same of me. I wish we could consider one another’s viewpoints thoughtfully, could push into hard conversations, could disagree without name calling.

In the words of Annie Reneau: “Discomfort doesn’t equal divisiveness. If we want to be part of the solution, we have to be willing to get uncomfortable. True unity lies on the other side of our discomfort, but we’ll never get there unless we listen our way through it, one honest, uncomfortable conversation at a time.”


* White Fragility is a state in which even a minimum amount of racial stress becomes intolerable, triggering a range of defensive moves. These moves include the outward display of emotions such as anger, fear, and guilt, and behaviors such as argumentation, silence, and leaving the stress-inducing situation.

** According to this definition, two elements are required in order for racism to exist: racial prejudice, and social power to codify and enforce this prejudice into an entire society. Reasons cited in support of this definition include that power is responsible for the creation of racial categories, and that people favor their own racial groups over others.

Throwing Stones
This stunning novel tells of one boy's search for the winning free throw. Now available wherever books are sold.
Jericho Walls
"As with the best historical fiction, this breathes life into an important era in U.S. history....[A] promising debut." -- Kirkus Reviews
Loading…}